Dr. Steve Garth and Billy Oswell from our Investment Committee summarise the fourth quarter of 2020 and the outlook for 2021. 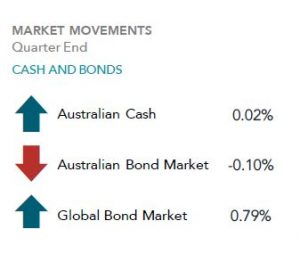 An extraordinary year in global markets ended on a positive note in an eventful fourth quarter, with equities registering very strong gains, led by small-cap and value stocks, while a strong credit premium boosted bonds.

The news headlines were dominated by the announcement of at least three new vaccines touted by their manufacturers as highly promising in preventing COVID-19 and the US presidential election, in which Democrat Joe Biden defeated the incumbent Republican Donald Trump. While Trump contested the outcome as fraudulent, his numerous court challenges proved unsuccessful.

Many economies showed signs of a rebound from the pandemic-induced recession of early 2020. Australian gross domestic product rose 3.3% in the third quarter.

Equity markets, as they had done since the second quarter, looked past current economic uncertainty and the health crisis to an anticipated recovery in 2021. The vaccine news, announced in November, further cheered investors.

The Australian market rose nearly 14% in the fourth quarter to end the year modestly higher, an unthinkable result back in the volatile days of March when the index had fallen more than 37% from record highs in the space of five weeks.

The final quarter was marked by a resurgence in value stocks after a long period of underperformance. Small caps, which had rallied strongly in Australia through most of the year, pushed on in the fourth, joined this time by global small caps.

Emerging markets outpaced developed markets over the quarter and the full year. In fixed interest markets, there was a positive term premium overall in the fourth quarter, though there were differences across individual markets. The prime mover was a continuing contraction in credit spreads to pre-pandemic levels.

Central banks again maintained easy monetary conditions. In their final meeting of the year in mid-December, US Federal Reserve policymakers upgraded their economic projections but maintained predictions that they will keep interest rates close to zero until at least the end of 2023.

The strong performance in equity markets coincided with a decline in the USD which fell more than 7% over the year against a basket of currencies. Much of this decline occurred in the final months.

The AUD ended the year just below US77c, up from 70c at the end of 2019 and well above the 18-year low near 55c hit during March. The rise in the local currencies meant hedged global portfolios outperformed their unhedged equivalents in the final quarter.